View source
watch 01:36
We're Getting Mutants in the MCU - The Loop
Do you like this video?
Play Sound

"I'll strike you down at full strength!"
―Strike's pre-finisher catchphrase[src]

Tasha Carter is the 23-year-old only daughter of the Carter Family who transforms into Kamen Rider Strike after expressing a desire to fight alongside her brothers. She later joins Genesis to help fight against Phisto.

Tasha was born on August 23, 1999 as the middle child and only daughter of Travis and Makayla Carter. She was three when her father burned down their family home under the control of Zebul, but would later state to her younger brother Jacob that she barely remembered the events. Growing up, Tasha strived to become "invincible" and would later begin learning karate in-between school and spending time with her brothers. At one point, Tasha and T.J. would lose Jacob during a game of hide and seek only to find him inside of an abandoned building, unafraid of the circumstances.

By the time Tasha graduated college, she had earned a black belt in karate. Due to this, she internalized the idea that she didn't need protection from her family and wanted to keep up the idea of her being strong on her own. She would also become friends with Colin Burke while in class.

Tasha was present when the Cult of Phisto attacked Jacob's coronation ceremony at Genome X. As civilians ran away in fear, Tasha fought against some of the Phistoids and later looked on as T.J. transformed into Kamen Rider Anima and fought the Cult's forces. One day during a hangout with her close friend Layla Quinn, the latter was captured by a criminal hired by the Cult of Phisto and Tasha handed herself over as insurance despite her older brother's objections. While captured, Tasha would question the man's motives and was told that he was doing what he was doing in order to better himself in life and that one had to be active in order to make a difference. Tasha then later defeated the man in a fight and was able to free Layla and herself. Some time afterwards during her karate class, she would unknowingly meet Berus under the name "Russel Beale", who was there to potentially use Tasha as a way to get to T.J. as Anima.

During a family vacation after her mother's discharge from the hospital, Tasha witnessed Skade's attack on T.J. and attempted to fight the Cult of Phisto figurehead Lilith, but was defeated by her. During Skade's takeover of Jacob's body, Tasha began to feel helpless over her inability to help save her brother and was approached by Lilith once again, who wanted her to join the Cult in order to become stronger.

Tasha would later receive the Cage Expandriver with the Cobra Beastamp from an unknown sender, but wouldn't inform anyone of the devices. When she learned that her karate instructor Sophia Combs was involved with the Cult due to her son's declining health, Tasha attempted to stop her with words, but was later fought and defeated by Lilith once again, who told Tasha that she was too weak to help Sophia. Tasha later attempted to use the Expandriver to fight the Planarian Innemon, but failed to activate the belt and transform. She was later scolded by Jacob due to her recklessness, but Tasha walked away from him and T.J., unwilling to give up on wanting to help her instructor. After conversations with both T.J. and Lilith, Tasha realized that she wasn't as strong as she thought she was, but accepted that fact about herself, giving birth to her inner demon, Najathi.

With her new found sense of strength and resolve, Tasha successfully transformed into Kamen Rider Strike and saved her instructor alongside her inner demon while also making an enemy out of Spencer Graham. Tasha would later receive other Beastamps from Ryder Marks that turned Najathi into weaponry for Tasha and was even able to defeat Spencer one-on-one when he became the Advanced Phase Planarian Innemon.

During the revival of Demolon, Tasha and her allies worked alongside the Knights of Talestia to prevent the demon's plans to destroy the world. The group would also encounter SOAR scientist James Douglas, who time travelled to the modern day to reconnect with his now elderly son Brian.

As part of the plans to beat Demolon, Tasha joined Saurex, Jacob, Lance, Noel, and Luceo in the future. They met an elderly Ryder there who allowed the six to change into previous riders, with Tasha becoming Space Knight, Date Knight, and Kamen Rider Amazon. Upon returning to the present, Tasha fought alongside Kamen Rider Jinken against the Eidolons.

Taking the Fight to the Cult

After the Cult's generals were scattered, Tasha was approached by Javon Mosley, who wanted her to help him get through to Berus so that the latter could apologize for his actions against the former Russel Beale. Tasha was able to get the two to meet, but Javon was unfortunately turned into a Phistian by Thanatos and Tasha was forced to fight the now out of control Russel before T.J. was able to split him from his Innemon form. Tasha was then approached by Russel the next day to help him convince Lilith to give up her blind allegiance to Phisto. While Tasha was unable to convince her, she was able to finally begin defeating Lilith in battles.

Being invited to the Burke family's home, Tasha was surprised to see their basement glowing, but decided not to enter yet and went home. Days later, she would enter the basement and would discover that the Burke family worked for an organization named Genesis and were the ones who sent her the Expandriver and wanted her to join them as they told her that she could not trust Genome X. Tasha refused to join, but willingly did work for them when asked. She was then present when Aidan was put into a coma by Thanatos before the Cultist defeated her, T.J., and Saurex effortlessly.

After the incident with Aidan, Tasha's trust in Genome X was shaken and she began to consider joining Genesis. During this time, she would also help Russel gain a stay at the Carter home after he was pushed away by Lilith. After T.J. and Saurex gained the Roller Beastamp, Tasha quickly deduced that Genesis had sent them the stamp and began to distrust them as well. She was soon after introduced to Brittany Marks, the leader of Genesis and Ryder's estranged sister.

After dealing with the threat of Kamen Rider Beelze and learning that she had Phisto cells within her via her father, Tasha was forced to deal with the out of control Demon Animalia, with the situation forcing her to reveal the existence of Genesis to her family. After T.J. and Saurex overcame their issues, Tasha reunited Ryder and Brittany, telling Ryder that it was best that Genesis and Genome X worked together to battle Phisto. While this attempt to fix their relationship was unsuccessful, Tasha revealed to Brittany that she would join Genesis in order to fight Phisto.

Similar to her two brothers, Tasha is a very calm and kind person, although she seems to have a shorter amount of tolerance towards people and can be very blunt with how she feels, being easily annoyed with her father's attempts to go viral. She also prefers to be self reliant and is unafraid to put herself in danger, shown when she helped T.J. fight of some Phistoids and when she willingly gave herself up to Nathan Russel as his hostage only to later use her martial art skills to disarm and knock out the older man when given the chance. She also is very loyal to her family and questioned why T.J. fights as a rider to protect the world if it costs them their family life. She also questioned the relation between strength and justice.

Due to her becoming a black belt in karate, Tasha developed the belief that she was strong enough to handle anything and was unhappy when being called weak or when her family tries to keep her away from fighting. This belief in herself caused her to turn a blind eye to her weaknesses and was unable to realize them. After receiving the Expandriver from Genesis, Tasha was finally able to confront and accept her weaknesses, giving birth to Najathi and strengthening her own resolve in the process. After becoming Strike, Tasha would run head-on into battles without much thought, but doesn't take her role as a rider for granted, being very prideful in her part of protecting the world.

Strike possesses balanced punching and kicking power, with the highest punching power among Genome X's Riders but relatively low kicking power. She also has the highest running speed, but the lowest jumping height. Due to Tasha being a karate student, Strike specializes in hand-to-hand combat In this form, Strike can extend the ponytail on her helmet and use it as a whip to attack enemies or wrap it around a target to retrain them.

Strike can use a Beastamp in the Cage Expandriver in order to transform Najathi into the corresponding Genome, which takes the form of a weapon she can wield.

"Weaponize Up! Arm up with Peacock! Let's go!"
―Transformation announcement[src]

By using the Peacock Beastamp in the Cage Expandriver, Strike can transform Najathi into her peafowl and Masked Rider Cross-X-based Peacock Genome. In this form, Najathi transforms into a pair of tessen.

"Weaponize Up! Arm up with Turtle! Let's go!"
―Transformation announcement[src]

When Strike activates the Turtle Beastamp in the Cage Expandriver, she can turn Najathi into her turtle and Masked Rider Next-based Turtle Genome. In this form, Najathi transforms into a bazooka that fires artillery shells made of green energy. The energy projectiles explode upon impact.

"Weaponize Up! Arm up with Shoebill! Let's Go!"
―Transformation announcement[src]

When Strike activates the Shoebill Beastamp in the Cage Expandriver, she can turn Najathi into her shoebill and Rock Knight-based Shoebill Genome. In this form, Najathi transforms into a scythe that can be used to perform purple energy slashes. This form is also able to cancel the contract of an Omega Phase or higher Innemon.

Kamen Rider Champion Strike is Strike's king cobra-based final form accessed by using the King Cobra Beastamp in the Cage Expandriver. It is the result of Strike fusing with Najathi, who forms additional armor.

This form more than doubles all of Strike's statistics, putting her roughly on par with Kamen Rider Animalia, in comparison to which she has slightly higher punching power as well as virtually identical jump height and running speed. However, her kicking power is much lower due to it and her punching power being balanced.

Five bladed appendages named the Hannack Fangs are attached to Champion Strike's back and shoulders. They can be controlled by Najathi to attack enemies, or Strike can use the bladed tips of two of them as handheld weapons. By spinning her body, Strike can swing the appendages to attack any enemies around her.

Tasha transforms into several past Legend Riders as part of the Clone Rider system developed by Ryder Marks of the year 2072.

This form is exclusive to Kamen Rider: Neo Generations 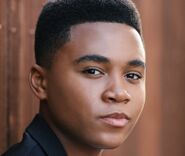