Designated "SB-555C", the knuckle duster-like device that is the Phi Shot was developed by Smart Brain as a means to protect the Orphnoch King constructed in the shape of an ordinary digital camera.

The Phi Shot was designed for specific compatibility with the Phi Mission Memory, transforming into an energy powered knuckle-duster that Phi can use for his Grand Impact attack.

While in Axel Form, the Exceed Charge attack is enhanced into the Axel Grand Impact, with Phi using his enhanced speed to punch multiple enemies while running through them.

This weapon shares the similar design to Chi's SB-913C Chi Shot only that this one coloured silver instead of gray. 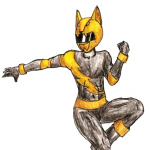