In 1971, scientists found a mysterious rock-like object deep within the mountains of Japan. While studying it, they broke it open and a mysterious red energy twister appeared out of nowhere, destroying most of the laboratory and killing the scientists. All that was left was a strange blue light, hovering in the other half of the object.

33 years later, a high-school boy named Shinoki Takano came upon the ruins of the laboratory. When he entered the ruins to inspect, he came upon the mysterious object, still emitting the weird blue light. Unknown to Shinoki, strange beings from another dimension suddenly appeared out of nowhere and ordered Shinoki to give them the object. Shinoki fought instead, and when the mysterious creatures became too powerful for him, the blue light channeled its energy into him, transforming him into a man with superhuman abilities. He became Kamen Rider Shadow! 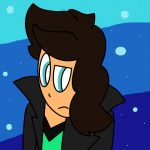