Henry Wells is the primary protagonist of Masked Rider. He is a brilliant young man who was kidnapped by SOAR and forced to turn into a super-powered cyborg. Before they are able to brainwash him, Henry escapes and decides to use his new powers for good, becoming Masked Rider One to fight for humanity's freedom against the evil forces that created him. As SOAR expands their activities worldwide, Henry leaves America in the hands of his successor James Cooper, later returning to America to help him defeat SOAR once and for all.

Because he was meant to be SOAR’s greatest altered human, Masked Rider One's capabilities are far greater than a normal man. He has the ability to hear at distances up to 4 kilometers away. He can break a meter thick tree trunk or a metal rod 10 cm thick with his Rider Chop. His Rider Kick has enough power to bend steel supports of buildings. Even when he wasn't fully transformed, this form was strong enough to withstand a 50,000 volt electric shock.

Unlike in his later forms, Henry can't transform automatically in this form, needing external wind to jump start the Aero Belt's turbine and give him access to his suit and most of his fighting strength. That wind is generally generated by riding his bike, but it also can come from other sources, like an explosion that pushes hot wind towards the Aero Belt. It is thinkable that becoming Masked Rider One has granted him a degree of immortality and immunity to organic diseases, viruses, bacteria and poison due to becoming a cybernetic human.

Masked Rider One consists of the following parts:

This form has the following techniques:

Ultimate One is the third form of Masked Rider One.

The upgrade gives him enough power and durability to survive a subzero trap and even a nuclear bomb close range with no apparent damage, and allows Lance the versatility for different techniques that can satisfy demands otherwise unattainable in his previous forms.

Ultimate One consists of the following parts:

Masked Rider One uses the power of the wind to fight. To transform, Henry originally sped on his motorcycle, Machine Galer, and leaps into the air, creating wind-pressure against his Aero Belt. The pressure spins the wheel in the center of his belt which then activates the micro-nuclear engine and allows him to transform.

Later on as he grew more powerful he learned to transform by absorbing the wind by himself (although he can still use any source of wind generated outside of his powers) thus getting rid of a major weakness. Like Masked Riders Two and Next, Henry has a weakness to the cold and can't transform properly when hit by sub-zero coldness as shown in episode TBD of his series.

The "old" Rider did not have a shout or a pose when he transforms.

Hopper Beastamp: Allows Aranea to access her Hopper Genomerge. It contains the genetic information of a grasshopper and is based on Masked Rider One. 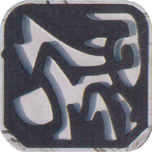