Fu-Ma Ninja Clan (formerly an outcast; due to time alteration)
Herself

Taki Gaiden: The Kunoichi Who Leapt Through Time

"You're one to talk, pretender!"
"We will see who the pretender really is.
"
―Another Taki confronting her present day-counterpart.[src]

"Brace yourself, slave of an evil blade!"
―Another Taki when confronting anyone who wields or is connected to Soul Edge.[src]

"The seal is complete!"
―Another Taki's post-mortem catchphrase.[src]

"I'm sorry... I know...that this would...happen. I know what it's like that two of us can exist in different eras. But... It would be better that there should be only one Taki that exist in those timelines. From this point on, you and I will become one. So, you can exist in this time and return to the village if you need to."
―Another Taki's last words as she becomes one with her prime counterpart.[src]

Another Taki (もう一人のタキ, Mōhitori no Taki?) is the name given to the Taki of the new timeline of the World of Soulcalibur to distinguish herself from her prime counterpart. At one point, Another Taki transformed into Kamen Rider Taki (仮面ライダータキ, Kamen Raidā Taki?) using the BeyonDriver and Taki Miridewatch.

Like her original counterpart's history, Another Taki is an outcast of the Fu-Ma clan and the most skilled adept of the Musō-Battō-ryū style. Her quest to find Soul Edge ended in a confrontation with Cervantes. She saved the holy warrior Sophitia from near death during the confrontation but lost her beloved sword Rekki-Maru. She returned Sophitia to her homeland before returning to Japan with hopes to reforge Rekki-Maru with a shard of Soul Edge. Strangely enough, it succeeded, and for some reason, it made Rekki-Maru even more powerful than it was before. Mekki-Maru, on the other hand, had the same property as with the original's, only without the shard of the cursed sword.

After her original counterpart and her party (Natsu, Goro Izumi, and Geiz Myoukouin) went back to 1584 at the request of Another Taki in 1586, they help her 1584 self fend off the Fu-Ma Clan from their attempt to take Mekki-Maru. Following their battle against Gel-O-Fury, NT Taki learns from Geki that Toki left Japan to seek after Soul Edge. This leads Another Taki asking her counterpart to go back a year further to prevent Toki from reaching Soul Edge by killing him. However, doing so can change the future, as in NT Taki's future.

As the original Taki went to 1583 to battle Toki, Another Taki returned back to Japan two years later sometime after Soul Edge was destroyed by Kilik, and there she once again fought Toki. After the original Taki defeated Toki in 1583, this resulted in a time paradox where her new timeline counterpart is no longer hunted by the Fu-Ma clan, thus allowing her to continue her mission in destroying Soul Edge much easier and safer. The Seal Is Complete! ~A.D. 1583~

Before parting ways with her counterpart, Another Taki took a blank Ridewatch from the latter and imbued it with her magical powers into it, and sealed the watch into its petrified state to entrust to her as a reward for her counterpart's efforts. The sealed Ridewatch would later be awakened as the Taki Miridewatch, in which her counterpart would use along with the BeyonDriver to become Kamen Rider Taki. Genesis ~A.D. 2018~.

Return and the dark truth behind Ivy Valentine's cursed blood

Another Taki reappears once again at the Black Tail Inn, the very last place where she fought Cervantes de Leon alongside Sophitia Alexandra, where she once again meets her original counterpart, Goro, Geiz, and Sougo.

After comparing her counterpart's similar history against Cervantes, she also told them about the so-called "child of the Cursed Sword", of which Cervantes intends to use as a spare vessel in the event of his untimely death to resurrect Soul Edge. That said child is revealed to be none other than Ivy Valentine, who was conceived from a woman whom Cervantes had raped, and left the child into the doorstep of a noble family in England.

During Gurenryu's attack on the Fu-Ma clan village, Another Taki sacrifices herself to protect her prime counterpart and her apprentice from the ancient dragon's deathblow. In her last moments, she merges with the original Taki, both body, mind, and soul. Since then, she now lives on in her prime counterpart, allowing her to exist in the new timeline. Even after Taki reset the World of Soulcalibur's timeline, Taki is still able to exist in the World of Soulcalibur, thus negating the irregularity of her existence.

Even after her counterpart changed her future by taking out Toki during the time she escaped with Mekki-Maru, she continues her mission to destroy Soul Edge. Though she comes to terms with her original counterpart and understood what it means to create a path towards her own future.

Another Taki appears to possess, if not all, similar abilities that of her original counterpart, but with slight differences as her 2018 counterpart also incorporated Ridewatches' powers.

Genesis Type (ゲネシスタイプ, Geneshisu Taipu?), also known as the Legendary Defender (伝説の防御者, Densetsu no Bōgyosha?), is Kamen Rider Taki's primary and default form accessed through the Taki Miridewatch. Her visor reads "Rider" (らいだー, Raidā?) in hirigana, while the logo on her forehead reads "Kamen" (カメン, "Kamen"?) in katakana. Taki's primary weapon in her base form is the Zikan Kenganbrade. She also retains the Ryuseimaru as her secondary weapon.

During transformation and in-between Futurering form changes, Taki's face can be seen behind the Caliber H.

Taki's suit is composed of the following parts:

In this form, Taki receives more significant boost in stats compared when wearing the GalaxyArmor. Taki Genesis Type is stronger than Zi-O DecadeArmor, she can also run at superhuman speeds faster than the eye can see and instantly jump at an unprecedented height much like what she does without transforming. Unlike Zi-O and Geiz that need the corresponding Ridewatches to destroy an Another Rider, this form allows Taki to permanently destroy an Another Rider. However, this does not apply to Another Riders based on Kamen Riders from the future that needed to be defeated using a corresponding Miridewatch. 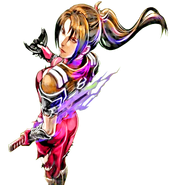 (Another) Taki in her Soul Chronicle ending

Another Taki is voiced by Nanako Mori (森 なな子, Mōri Nanako?), who is best known for voicing Kenjou Akira/Cure Chocolat in KiraKira☆Pretty Cure A La Mode and Naga in Cross Ange. Her live-action appearance is portrayed by Asana Mamoru (護 あさな, Mamoru Asana?), who also portrays her prime counterpart, while being voiced by Mori.

In the English version, she is voiced by Cynthia Holloway, who also voices her 2018 counterpart.